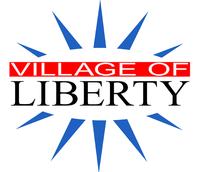 The Liberty Village Historic District was listed on the National Register of Historic Places in 1978. Portions of the content on this web page were adapted from a copy of the original nomination document.

The Liberty Village Historic District is comprised of 12 buildings in a mixed-use area just north of the central business district. The area extends two blocks along the west side of North Main Street and the east side of Academy Street and a short block along Law Street which connects North Main and Academy Streets. Building types in the district range from modest vernacular dwellings to the stylish United Methodist Church complex and O.E. Keller Mansion. The buildings are related to each other in a manner typical of many older neighborhoods: the religious-commercial district blends to residential use at the edges of the business district. Grand residences lie close to the village center and along the main street; less imposing structures on smaller parcels nearby.

On the southern edge of the Liberty Village Historic District lies the Hillig Photo Studio, 84 North Main Street. It is a narrow, two-story brick commercial building; it was custom-built in 1914 to serve as the studio of photographer Otto Hillig. The design incorporates a decorative tile facade with a large cartouche and stylized pilasters.

94 North Main Street, which shares a common wall with the Hillig studio, was built by Hillig in 1922. It is much smaller than the studio, but similar to it in being a narrow, two-story, commercial building of brick. While the street-level facade is now much altered, it is evident from the appearance of the second-story that the front was designed to conform with and enhance the careful detail of the studio.

Neighboring the Hillig complex is the Keller House, 120 North Main Street. This fine example of Downing-inspired Gothic Revival architecture was built in the mid-nineteenth century and altered in the 1880's by the addition of bay and second-story windows, broadening of the front porch, and additions to the rear. The house is sited on a large, landscaped lot and surrounded by a low cut-stone wall. Also on the property are a nineteenth-century carriage barn and a later garage.

On the corner of Law and North Main Streets, 126 North Main Street is the Liberty Professional Building. It is a two-story, hipped-roof, random ashlar structure designed in the Romanesque style. Roman arches top many of the windows and the doors, that of the main entrance being graced by a pair of decorative colonettes. In 1922 a one-story addition to the north side was built of brick, with a facade of the same random ashlar stone as the original.

The center of this block is occupied by the United Methodist Church, flanked on the north by its parsonage and by Memorial Hall on the south. Central to this complex is the church itself, a frame building in Greek Revival style with a later square tower attached to the southeastern corner. The gable end faces the street and has two pilasters flanking each side of a large stained glass window of Palladian format. In 1890, the church was moved to a new foundation slightly to the north, the tower and ornate octagonal belfry were added, and the interior was redesigned. Although partially renovated in 1968, the sanctuary remains essentially unchanged from the 1890 design: the cherry pews are arranged in the semi-circular "Akron plan" on a floor which rises slightly toward the rear and side walls. The interior is decorated in carefully crafted cherry panelling and molding.

The parsonage was erected just north of the church in the early years of this century. It is a typical frame residence of the period, with a hipped roof and wide colonnaded front porch.

To the south of the church and connected to it is the Memorial Hall, a frame structure built in 1908-9 in a style and materials harmonious with the Greek Revival silhouette of the original church building.

All these structures in the Methodist Church complex were sided in aluminum in 1976, with care taken not to destroy the period character of the buildings or to cover any of the architectural detailing.

North of the parsonage is the Tompkins House, a two-story vernacular frame dwelling. The original three-bay house was probably built in the third quarter of the nineteenth century, with additions in a similar style made prior to World War II. A small frame garage sits at the rear of the property, accessible from Academy Street.

At 87 Academy Street, neighboring the Tompkins garage and the rear of the church property, is the Nestler Home, another two-story, frame, vernacular dwelling of the mid-to-late nineteenth century. The gable end, three bays wide, fronts on Academy Street.

On the corner of Law and Academy streets are two structures now connected to form the Wirth House. The older is a one-story frame structure in the Greek Revival style used for professional offices since the 1880's. The main house, dating from around 1905-10, is a two-and-one-half story stucco dwelling ornamented by Tudor derived bay windows and revealed-timber decoration.

Significance
This small portion of the Village of Liberty developed largely during the last two-thirds of the nineteenth century and has remained essentially unaltered for the last fifty years. Thus, the Liberty Village Historic District is significant as an unusual survival during a period when surrounding Sullivan County, and particularly the Village of Liberty, has experienced much unplanned growth in its development as a summer resort area.

The Village of Liberty emerged very early in the nineteenth century as the commercial and social center of a young agricultural community. Except for a short time in mid-century when the tanning industry flourished, the region continued to have an agricultural base for the first three quarters of the century. By the time the village was incorporated in 1870, it housed churches, schools, stores and hotels and about 600 inhabitants who provided commercial and professional services to the local farmers. The United Methodist Church, the small office building on Law Street, the Keller House (built by a local doctor) and several other dwellings in the Liberty Village Historic District date from this period. When the railroad came through in 1873, the village tourist industry was born. The resultant prosperity gave rise to much building activity around the turn of the century. Major alterations were made to the Keller House and United Methodist Church building at this time, and additions to the neighborhood in the form of the Hillig Studio, the Liberty Professional Building (then the Sullivan County National Bank), and adjuncts to the Methodist Church soon followed. Since the 1920's, the village has been extensively developed in a more modern mode, and today the Liberty Village Historic District is all that retains the earlier flavor.

In addition to the period character of its streetscape, the Liberty Village Historic District is significant in containing some individual structures of singular merit:

The Hillig complex is distinctive in its design, displaying individuality and sophistication of taste unusual in this rural region. The tiles which ornament the facade are unique in the area. Otto Hillig, who had the studio built in 1913, was a photographer who served the Liberty area for fifty years before his retirement in 1947. He was well-known locally, not only for his photography, but as a traveller and innovator. He owned one of the first automobiles in the county, and toured across the continent in it in 1916. As early as the 1920's he was experimenting with aerial photography, and in 1931 he flew the Atlantic in a Bellanca monoplane, the "Liberty." On his return home, he built a small castle, reminiscent of those in his German homeland, where he resided until his death in 1954. Both residence and studio were allowed to deteriorate after his death, but are now restored.

The Keller House, a Downing-inspired Gothic Revival Villa built in the mid-nineteenth century, is also unique in the area. It is locally significant not only for its outstanding architecture, but as the oldest surviving residence in the village and former home of several prominent citizens. The first of these was a John D. Watkins who established his medical practice there in the 1830's. He was also partner in a general store and founder of the Liberty Normal Institute, chartered by the New York State Board of Regents in 1848. Among his philanthropies was a generous donation to the Methodist Church when it was established at its present North Main Street site. After Dr. Watkins' death, the house passed to his nephew, James Chandler Young, who also bought out Dr. Watkins' general store. Young was of local note, not only for his mercantile interests, but also as a founder of the Sullivan County National Bank, and as a successful dairy farmer. He and his father donated the Memorial Hall to the United Methodist Church in memory of his mother. Following his death, ownership of the house passed eventually to his daughter Polly and her husband Otto Keller. The Keller family continued the tradition of philanthropy established by previous owners by donating the house to the Town of Liberty. The town plans [1977] to turn the house to governmental use without altering the period interior of ornate fireplaces, curved bay windows, ornamental plaster work and leaded glass windows.

The United Methodist Church is remarkable both for the original Greek Revival design, much of which is still visible, and for the nineteenth-century alterations and additions, which are unique in the county for both the grandeur of conception and for their having survived intact. The church has been preserved very carefully since the 1890's, altered only by needed maintenance and repairs. The parsonage and Memorial Hall, added to the church complex in 1905-1910, are compatible with the design of the earlier structure.

The Romanesque-style Sullivan County National Bank dates from 1898. It was the first bank in the Liberty area and is the most distinctive building of its type in the village.